Mom went home for Christmas.  My parents were driving back to Gadsden, Alabama from Dallas.  I had to work and couldn’t take off the necessary time to make the drive back home.  The girl I’d been dating for the last 9 months was gone.  We’d broken up hard and fast… just the way we started.  I found myself on the verge of self-pity, drinking from a bottle on the kitchen table… strumming guitar.  It was 1993.

A few swallows in… I could hear the TV news doing there annual predictions a week out from Christmas about snow or no snow and the predictable, “No White Christmas in the forecast, but…” routine.  With a strum from a D-Chord… I said, “There’s no snow… on the ground here there’s no pretty lights.”  In a matter of minutes, I had written a song.  One of the fastest songs I’d ever written.  I liked it.  I liked it enough that I wanted to lay it down… with multiple tracks as soon as possible.  The thought of recording a Christmas song and finishing it after the holidays was almost as depressing as the song I’d just written.  I wanted to record it immediately.

I called a few picker friends of mine… they all had recommendations but getting some studio time on spur of the moment was difficult.  I made one last phone call to a studio in Lancaster… which was about 45 minutes south of Dallas.

“Sure, that’s cool… I have two tracks I wanna lay down so it may be a late night”, I said. He seemed more than okay with working into the middle of the night.

I had originally assumed that the studio was just so booked that he had to squeeze me in.  I was wrong.  He wanted to do this late at night… well… because I was recording songs about Christmas that didn’t include Baby Jesus and mangers… songs about bottles on the table and drinking.  The second track was going to be even worse… it was about cheating.  Hell… the title of the song was Cheating Time.  Did I mention this was a gospel studio?

So I unpacked my guitar case and my acoustic pick-up.  I sat down across from him and we started going through Christmas Alone.  We laid down the drums, then he had me lay down the rhythm.  As I looked over at this guy, he was having a blast.  He was probably about 42 years old.  He had reddish blonde hair with a full beard to match.  Hell, he was digging this music.

“Mind if I lay down some lead licks”, he asked as he reached for a Fender Strat. 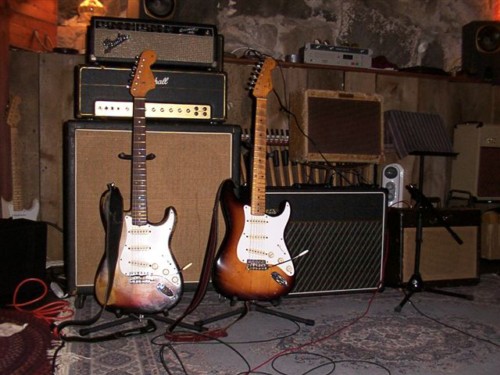 He made faces… you know the kind of faces that guitarists make when they’re hitting the licks just the way they want.  I couldn’t tell if this guy was an outlaw or a devout religious person.  He could have passed for touring with Waylon or preaching from the pulpit.   By the time we finished Cheating Time, it was 2 in the morning.

As he was putting the final mix together, he asked if I wanted them on CD or cassette?  CD was gonna cost extra.  “My music on CD?”, I thought.  I was hitting the big time now.  Remember, this is 1993.

“If you’re cool with it… I’d like to make myself a couple copies.  This is good stuff”, he said.

It was nice to hear that from this guy.  He was the first person to actually hear the song after I’d written it.  I wasn’t sure how people might react.  Now… I felt good about it.

I drove back home listening to the songs… proud of it.  I promptly recorded a dozens or more cassettes from the CD master, and gave them out like candy.  I even managed to mail one back home by Christmas and the family loved it.  So the one Christmas I actually spent alone… ended up being not so bad.

There’s no snow on the ground here

But I’ll have a Silent Night

And I don’t guess I’ll need that mistletoe

There’s no presents wrapped up neatly

The only thing I’m needing

And I can hear December’s cold wind blow

And I hear Silver Bells but I’m going through hell

And she’s out there somewhere

If that one-horse sleigh would help her find her way

Back to the one who cares

But I’ll hang up before she says, “hello”

And then I’ll spend Christmas alone

There’s no snow on the ground here